The full text of Press Release issued by CBDT (Cenral Board of Direct Tax) is as follows:

The CBDT vide its earlier notifications had exempted salaried employees having total income up to Rs. 5 lakhs including income from other sources up to Rs. 10,000/- from the requirement of filing return of income for assessment year 2011-12 and 2012-13 respectively. The exemption was available only for the assessment year 2011-12 and 2012-13. The exemption was giving considering ‘paper filing of returns’ and their ‘processing through manual entry’ on system.

However, this year the facility for online filing of returns has been made user-friendly with the advantage of pre-filled return forms. These E-filed forms also get electronically processed at the central processing centre in a speedy manner. Hence, the exemption provided during the last two years is not being extended for assessment year 2013-14. Taxpayers are encouraged to file their returns electronically. E-filing is an easy, fast and secure method of filing of income tax return. Moreover, Digital signature is not mandatory for these taxpayers and they can transmit the data in the return electronically by downloading ITRs, or by online filing and thereafter submit the verification of the return in From ITR-V acknowledgement after signature to Central Processing Centre.

The processing for E-filed returns is faster. From 25th July to 31st July 2013 (Except 27th and 28th July being holidays), Special Return Receipt Counters are opened in IT Offices  (FOR SALARIED TAX PAYERS)

Posted by SURESH KUMAR at 10:23 PM No comments:

Details/Pattern of Postal/Sorting Assistant (PA/SA) Phase-II Exam 2013 (Computer/Typing Test)
Now as Postal Department started publishing the List of Shortlisted Candidates for Paper-II based on the performance in Paper-I(Aptitude Test), its time now to understand the details of Paper-II (Computer Typing/Data Entry Test) & Practice it.

Here is the list of number of candidates shortlisted from each Circle based on the results declared so far.
Pattern of Paper-II (Computer / Typing Test):

The Typing Test shall be for a duration of 30 minutes (15 minutes each for Typewriting and data entry) consisting of one passage of 450 words in English or 375 words in Hindi to be typed with a minimum speed of 30/25 words per minute respectively & Data entry of some figures and letters each carrying equal marks on Computers.

The typing test and test of data entry operations will be conducted on Computer key board but not on type writer.

Note: The final merit shall be prepared on the basis of the aggregate marks obtained by the Applicants in the Aptitude Test (Paper I) only subject to their qualifying in Computer/Typing test ( Paper II). ie, there will be no marks for Typing/Data entry test. You have to just qualify the minimum criteria in Paper-2 and final merit list shall be prepared on the basis of marks of Paper-I only.
source:-CHQ

Posted by SURESH KUMAR at 11:08 PM No comments:

SETTLEMENT OF MINUS BALANCES IN SB ACCOUNTS - DRAFT REPLY

To
The Sr. Superintendent of  Pos.,

With  reference  to  the  letter    cited ,  it has been mentioned  that , there is negligence on my part, on the  noted  SB accounts  which  resulted  in   minus balance  on the said accounts. Based   on that, a recovery of Rs……………. is  proposed  to be made from my pay and allowances.

In this connection  ,  I am to submit  the  following  for  your   kind  consideration and for issue of  favourable orders.

1.  Rule 18 of PO SB General Rules, 1981 empower the Postal Department to recover any excess paid amount paid to the depositor as arrears of Land Revenue from the depositors. Hence I request to initiate action as per the Rule ibid for settlement of the Minus Balance.

2. Further, I was not given any of the  copy of  documents, by which , establishing  that I was actually responsible for the  minus balance, since the noted  dates of transactions were between the year …………… to ……………..  For eg. copy of  nominal role, user code maintenance record containing authorization on the software, print out copy of  my pass word usage on the  said transactions, copy of LOTs concerned , SO SB OM Register, SBCO OM register , SB 46 registers etc. Though, instructed in the  ref., I was not allowed to pursue  with the connected vouchers/supplied with copies of records etc. This is totally a denial of   natural   justice.

3. As per Rule 48 (ii) of PO SB Manual Volume I, the  Ledger Assistant at  HO   should post the entries in the ledgers concerned and any discrepancy  noticed should be  booked into. This was not done in this  case  and  the part of  S.O. SB  is completely hided ,  with a motive to favour on selected interests.

4. As per  Rule 92 (2)  (i) , (ii) , (iii), (v) and Rule 92(3) of PO SB Manual Volume I, Objection registers should be maintained with recordings of  difference in balances at SO SB and  SBCO and  extract should be  sent to S.O.s  to rectify then and there. Monthly statement of the pending objections should be sent to the AO ICO (SB) and  Senior Superintendent to take further action. These were not done in this case and if so  the relevant  records should be  given access to the charged official  to prove his  innocence.

5. Since  there are  agreements made by the  SBCO   years-to-gether, and list of balances verified through the authorities concerned,     for  any reported  left over/excess/short entries in manual  ledgers/computers  of ……..  years  back,  the official working at S.O. level should not be selectively cornered.

6. As per  Standard Inspection Questionnaire prescribed by the Department , vide  para 27 (ii) and  32(c) checks should be  made by the Inspecting authorities for verification of balances through issuance of SB 46 notices to the depositors concerned, and verification of SO balances concerned with  HOs and  nothing  seems to be done in this case for the past …………….. years and  failure, if any,  is now rushed to be fixed only on the part of  SO level, leaving the Inspecting authorities/Mail Overseers  in a biased manner.

7. No sub- ordinate officers/ inspecting  authorities/SO SB/SBCO officials, are issued with notices  for  recovery of pay, on whose part there are many such  lapses in such of those  cases, and I should not be  singled out for any recovery  in this case.

9. As per  Rule 107 of P&T Man.Vol. III ,  the Disc. Authority should  correctly assess in a realistic manner the contributory negligence, and while determining any  omission or lapses on the  loss considered and the extenuating circumstances in which  the duties were performed by the official, shall be given due weight,  but  nothing has been done in this case.

In view of above, it is requested  that   I may be allowed  to go through the  records pertaining  to the periods covered/ supplied with the copies of records as said above,  under which  such  minus balances occurred. Thereafter, I shall give my final reply in this connection.

C. G. Employees and their dependents can avail treatment in a non empanelled Private hospitals in emergency conditions and get reimbursement 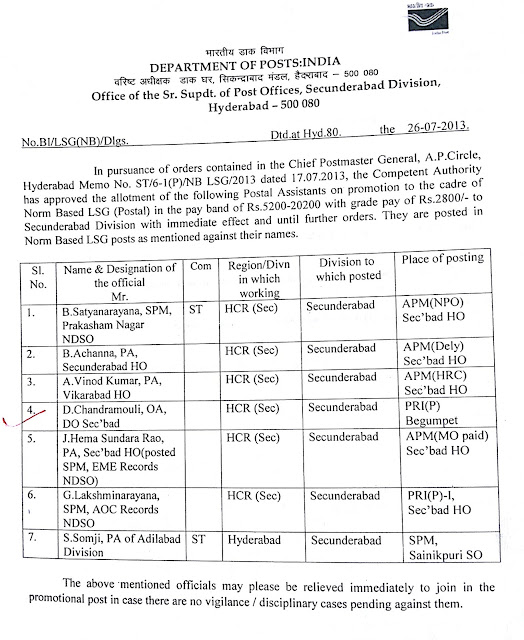 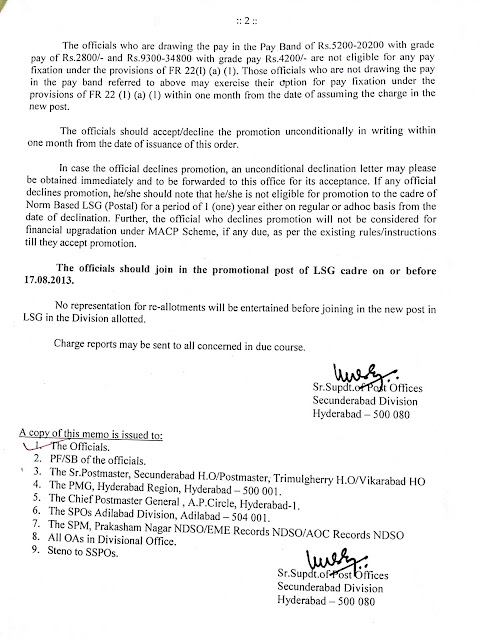 Posted by SURESH KUMAR at 4:13 PM No comments:

Dear Comrades,
Clarification issued by Department of Pensioner and Pensioners Welfare vide OM dated 25/07/2013 regarding Issue of Pensioners ID card. Click here to get the orders
Posted by SURESH KUMAR at 3:50 PM 1 comment: 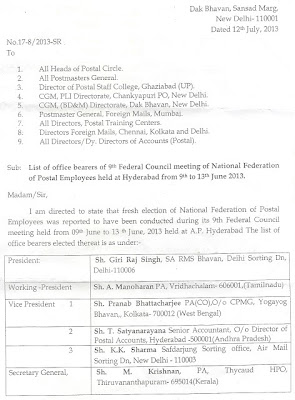 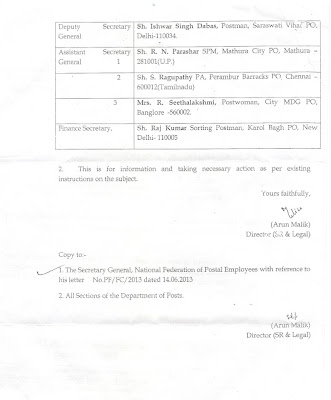 Posted by SURESH KUMAR at 10:07 AM No comments: 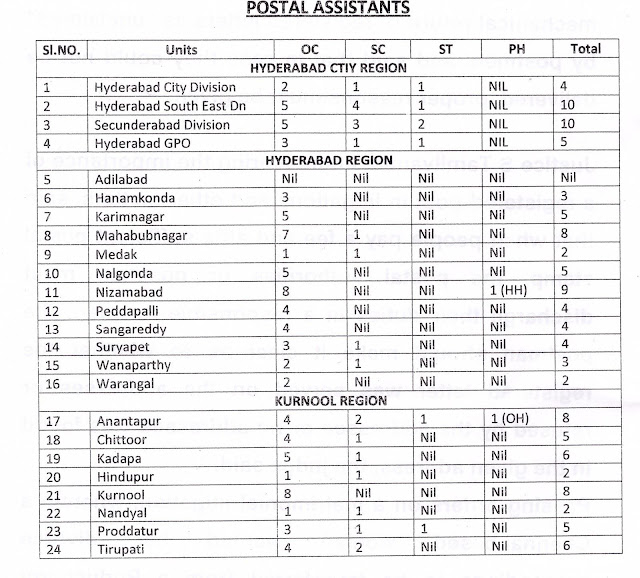 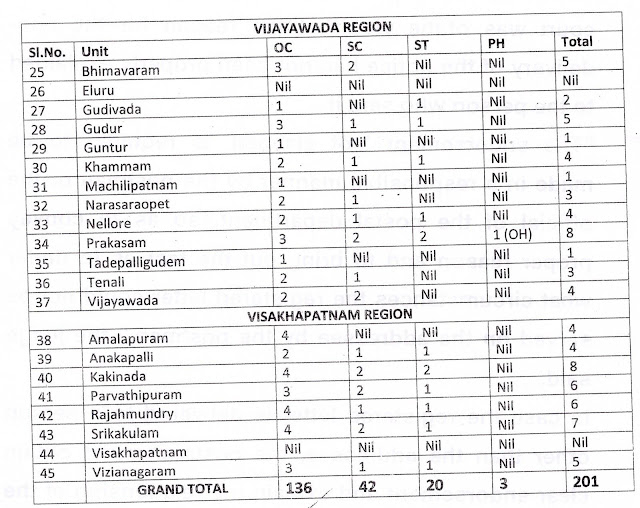 Posted by SURESH KUMAR at 11:08 PM No comments:

NEW DELHI: The expenditure department has decided to sanction Rs 1,300 crore to the proposed Post Bank of India to meet its capital requirements even as the department of financial services (DFS) - the wing in the finance ministry that deals with state-run banks and their poliiies - chose to stay away from the  issue.
The proposal's backing by the expenditure finance commission and its subsequent green light by finance minister       P Chidambaram is seen as the official go-ahead by the finance ministry, ignoring the DFS's stance. The DFS position is seen as the first instance of the agency not backing the Post Bank's plan, which officers in the department have privately mocked at
"They think they can use the postal deposit model for their banking foray. Nothing in their plan seems to be clear. Banking isn't easy," said an officer, who did not wish to be identified. In fact, a strong Post Bank is seen to be the biggest challenge to existing public sector banks, including State Bank of India, which controls 70% of the banking business in the country. SBI, the largest lender, has a little less than 15,000 branches, while there are over 1.5 lakh post offices across the country.

Although Post Bank does not intend to open a bank branch in each post office, the plan is to use postmen to meet the financial inclusion goal. Secretary (posts) P Gopinath refused to speak to TOI despite several attempts.

While converting the entire postal network would have meant a capital requirement of over Rs 60,000 crore, by setting up a special entity, the fund requirement has been reduced. This, officers said, will also help create a more focused strategy.
Source : THE TIMES OF INDIA  dated 22/07/2013

Posted by SURESH KUMAR at 3:42 PM No comments: