In accordance with the provisions of Sub Section (1) of Section 22 of the Industrial Disputes Act, 1947, we hereby notify that all the Postal/RMS/MMS/Administrative & Postal Accounts Employees and the Gramin Dak Sewaks of NFPE & FNPO) will go on indefinite Strike from 11th July,2016.

The Charter of Demands is enclosed herewith 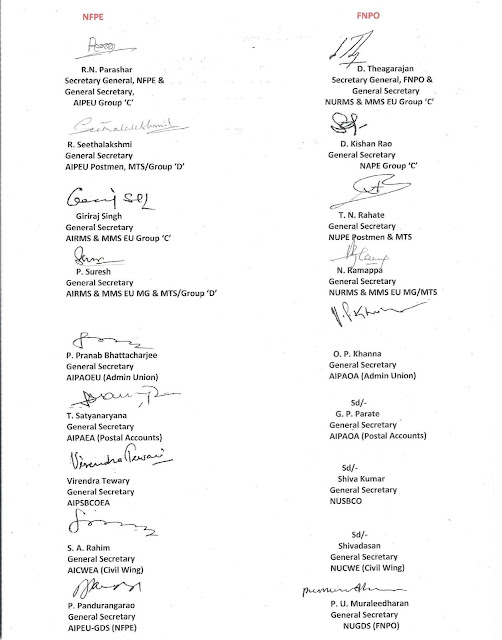 1.     Settle the issues raised by the NJCA on the recommendations of the 7 CPC     sent   to Cabinet secretary vide letter dated 10th December 2015.
2.   Remove the injustice done in the assignment of pay scales to technical/safety    categories etc., in Railways & Defence, different categories in other Central Govt.   establishments by the 7 CPC.

(ii)Treat GDS as Civil Servants and extend proportional benefit on pension and   allowances to the GDS.

6.    Fill up all vacant posts in the government departments lift the ban on creation         of   posts; regularize the casual/contract workers.

8.    Extend the benefit of Bonus Act 1985 amendment on enhancement of payment ceiling to the adhoc Bonus/PLB of Central Government employees with effect  from the Financial year 2014-15.

9.      Ensure five promotions in the service career of an employee.

10. Do not amend Labour Laws in the name of Labour Reforms which will take    away   the existing benefits to the workers.

2.     Upgrade the pay scales of various cadres in the Postal Department as demanded in the Memorandum submitted to Seventh CPC and Secretary, Department of Posts.

3.   Filling up of all vacant posts in all cadres of Department of Post.

4. No harassment and victimization for trade union activities/CBS/CIS and other matters.
Posted by NFPE
Posted by SREEDHARASWAMY at 10:58 PM