No separate rail budget from next fiscal; Union Budget early 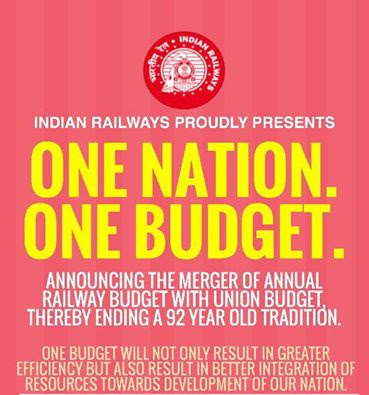 New Delhi, Sept 21 :  Ending 92-year-old tradition, the Cabinet today decided to merge rail budget with the general budget and agreed in-principle to advance the date of its presentation in Parliament from the usual February end.

The actual date for presentation of the general budget for 2017-18 will be decided by the government after taking into account the ensuing assembly elections, Finance Minister Arun Jaitley said while briefing the media about the Cabinet decisions.

The Cabinet has also decided to do away with the Plan/ Non-Plan expenditure classification in Budget 2017-18 and replace with 'capital and receipt'.

The government, Jaitley said, was in favour of advancing the budgetary exercise to that it could be completed before March 31 and expenditure on public-funded schemes could begin from April 1.

He said: "While we in-principle are in favour of advancing the budget date and finishing the entire financial business before March 31...the actual dates will be decided after consultations depending on calendar of the state elections."

The government, he added, is keeping itself in a "state of readiness" to advance the Budget presentation.

As per tradition, the Budget is presented on the last working day of February. A separate railway budget was started by the British in 1924.

Economic Affairs Secretary Shaktikanta Das said the Central Statistical Organisation (CSO) will provide provisional Advance Estimates of national income or GDP by January 7 so that the data can be incorporated in preparation of Budget.

The provisional advance estimates, he hoped, would be in line with the one normally released by February 7.

Das said the government will issue Budget circular in a day or two.